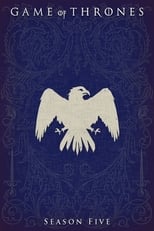 The War of the Five Kings, once thought to be drawing to a close, is instead entering a new and more chaotic phase. Westeros is on the brink of collapse, and many are seizing what they can while the realm implodes, like a corpse making a feast for crows.

Series 5 sees Daenerys Targaryen continue to grow in power which is not going unnoticed by those in Westeros. Elsewhere, Jon Snow faces some major changes on the wall and Aryr Stark continues on her quest for revenge.TV-MA 1,476,400 views57 minDramaDavid BenioffUnited StatesEnglishHBOReturning Series