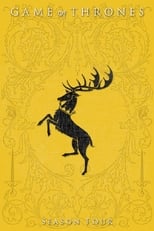 The War of the Five Kings is drawing to a close, but new intrigues and plots are in motion, and the surviving factions must contend with enemies not only outside their ranks, but within.

In Season 4, the Lannisters hold on the Iron Throne remains intact in the wake of the Red Wedding slaughter that wiped out many of their Stark nemeses. But can they survive their own ego as well as new and ongoing threats? In King';;;;s Landing, Tyrion welcomes Prince Oberyn Martell of Dorne for the royal wedding. Elsewhere, Jaime readjusts to life after his imprisonment. Up North, Jon shares what he learned beyond the Wall as the wildlings continue to plan their attack. Â TV-MA 1,597,100 views57 minAdventureDavid BenioffUnited StatesEnglishHBOReturning Series